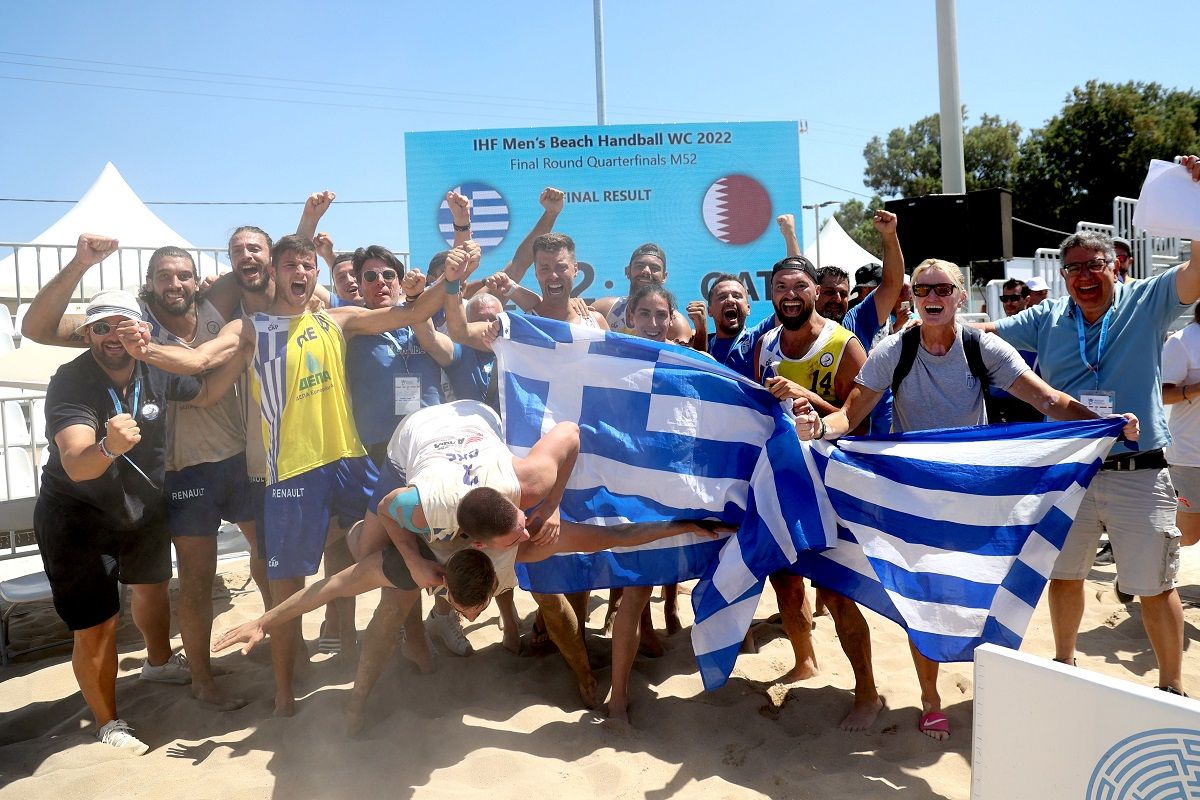 The hosts’ win over eight-men Qatar (two players were missing due to medical reasons) means they punched their ticket for the 2023 World Beach Games in Bali.

In the first set, Greece was ahead with 6:4, thanks to three spin-shots by Ladakis. Qatar managed to equalize and got in front with 14:12 when the ball slipped away from the hands of Karagiozopoulos. Inminute 8 Qatar was leading by four (18:14) for the first time in the game.Ten seconds before the end GiorgosEleftheriadis equalized (20:20) and immediately Qatar requested a timeout. In their last attack,the Qataris scored with a one-point shot go up by one set to none.

In the second set, Greece coach Giannis Lazaridis playedPapazoglouin the goal-line andhis choice was justified when the 25-year-old goalie parried five shots. At 03:44 the score was 9:4 in favour of Greece who maintained the reins until the end of the set.

In the shoot-out, both teams scored with all their five first shots. Qatar were the first team to miss with Gourgoumis saving Ahmed Murad’s shot. Boskos scored one-point tosend Greece to the semisand his teammatesin the centre of thecourt for a post-game sirtakicelebration dance.

"It is one of ourbiggestvictories an unprecedented moment for the Greek handball. It was a tough game in which weshowed patience, passion and we strongly believed in victory. Every single playergave everything he had and we made it altogether.

“Now we have Croatia ahead of us, one of the best teams in the world. We have played them before and we know them well. We have seen other games of Croatia as well and I believe we will be able to go to the final”.

"We are in… trance, this is one of Greek handball’s greatestmoments. We did our best to achieve our initial goal, which was to qualify for the quarter-finals and then to reach the semi-finals. Now we will challenge Croatia for a place in the final.

“We thank the fans for their support and we are waiting for them to stand by our side in the semi-finals as well. The Croats are very strongand have not dropped a set so far. But we aim to beat them".

“I am overwhelmed. These are tears of joy, of pride of emotions. It was a very tense game.

"I was waiting for them to lose one shot and when Gourgoumis blocked the last one, all the tension came out. Then came Boskos who never misses and now we are in seventh heaven.

"We gave everything we had, we live fatastic moments. Down to the wire it took one save, one well-aimed shot to reach the semis. We have never reached the semi-finals of a World Championships, either indoorsor in beach handball. But we do not stop, this is not the end of the road.

We lost to Croatia yesterday but we face them again tonight and we start from scratch".

"The responsibility was huge, but at that moment, when you face the challenge you have to rise to the occasion. We gave our heart and soul, the Greek ethos and now we want to win a medal".