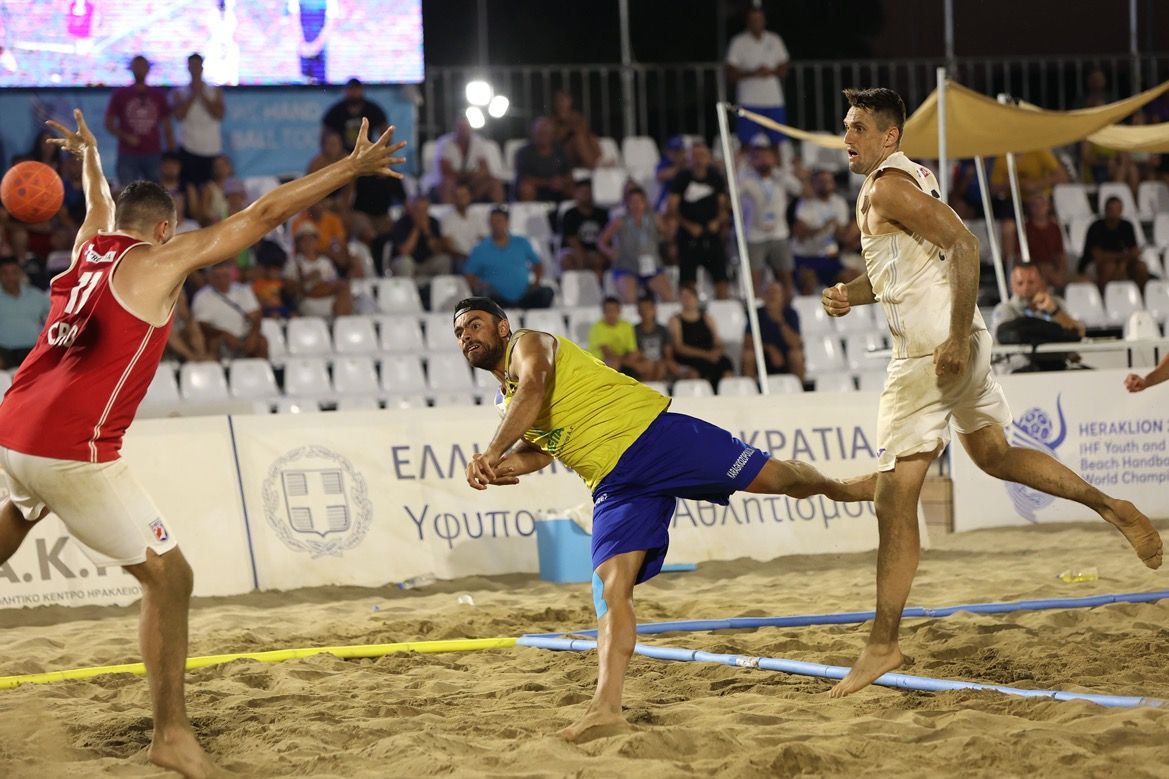 Croatia will be Denmark's opponent in the grand final of the World Beach Handball Championship as they beat hosts Greece 2-1 in the semi-final.

The match was really for...nerves as both teams showed from the first seconds how much they wanted it. At the start of the match neither team managed to get a gap and a clear lead. Croatia led by 3 points in the 6th and 8th minute (14-11 and 18-15) but Greece managed to take a 19-18 lead with goals by Tsanaxidis and Ladakis. Bura scored a spin move to make it 20-19 for the guests, and Tsanaxidis tied the game with 2 seconds left with 1 point and sent the game to the golden goal. Ladakis failed to get the rebound, but Croatia lost possession as Bura committed an offensive foul. Greece gained possession and Karagiozopoulos did not miss, giving Greece the first set.

In the second set, in the first few minutes the game did not change with both teams fighting every play. Greece was in a hurry in some attacks, resulting in some errors, which the Croatians took advantage of and gained a 5-point lead, which they maintained until the end of the set, sending the match to a shootout.

In this process, Greece was not successful as Theodorou, Ladakis and Eleftheriadis missed their attempts and Gourgumis' save was not enough to give Greece the victory.

So the Croats, although they struggled, managed to qualify for the grand final, where they will meet Denmark. Greece on the other hand will face Brazil for the bronze medal.

Ioannis Lazaridis (Coach) We lost, but we don't give up, because this team has a future and our future starts tomorrow in the small final against Brazil to win the bronze medal" said the coach of the men's national team, immediately giving the signal for a fightback. "The way the shoot-out process went, we lost fair and square, but we are not giving up. We will regroup to come back tomorrow and give our best in the minor final. We're going for the win, we're going for the medal."

Manolis Ladakis: "Now to think about how we're going to win tomorrow"

"We gave everything we had to give it all we had to give up, ultimately coming three shots away from winning. We took the first set, and they showed their class in the second, and then what happened happened. I don't know why we were so inept in our execution, maybe the pressure and inexperience in handling these situations at such a high level bent us."

Paranjik Mianten (Croatia coach) "Greece has improved and they deserve a lot of congratulations, but we have more experience in such crucial matches. The fans created an impressive atmosphere.

Now we go to play a European Final, against Denmark, who have a very strong team. It will be a tight game. We want the double in Heraklion (after the Croatian junior team won the World title a few days ago), although for the younger age groups the goal is to learn the sport and to staff the men's team in the future and acquire a winning mentality."

Juric Ivan (Croatian athlete): "It was a very strong match, as we expected. Greece is the host country and had the fans on their side. The atmosphere was great and we honestly enjoyed it.

Congratulations to Greece for their performance in the semi-final and for a very good showing in the tournament.

In tomorrow's (26/6) final against Denmark, we know it will be a very tough match, we know them and they know us. Our goal is gold and I believe we will succeed and give joy to our compatriots".