Christine Mansour: The earth, the wind, the sand 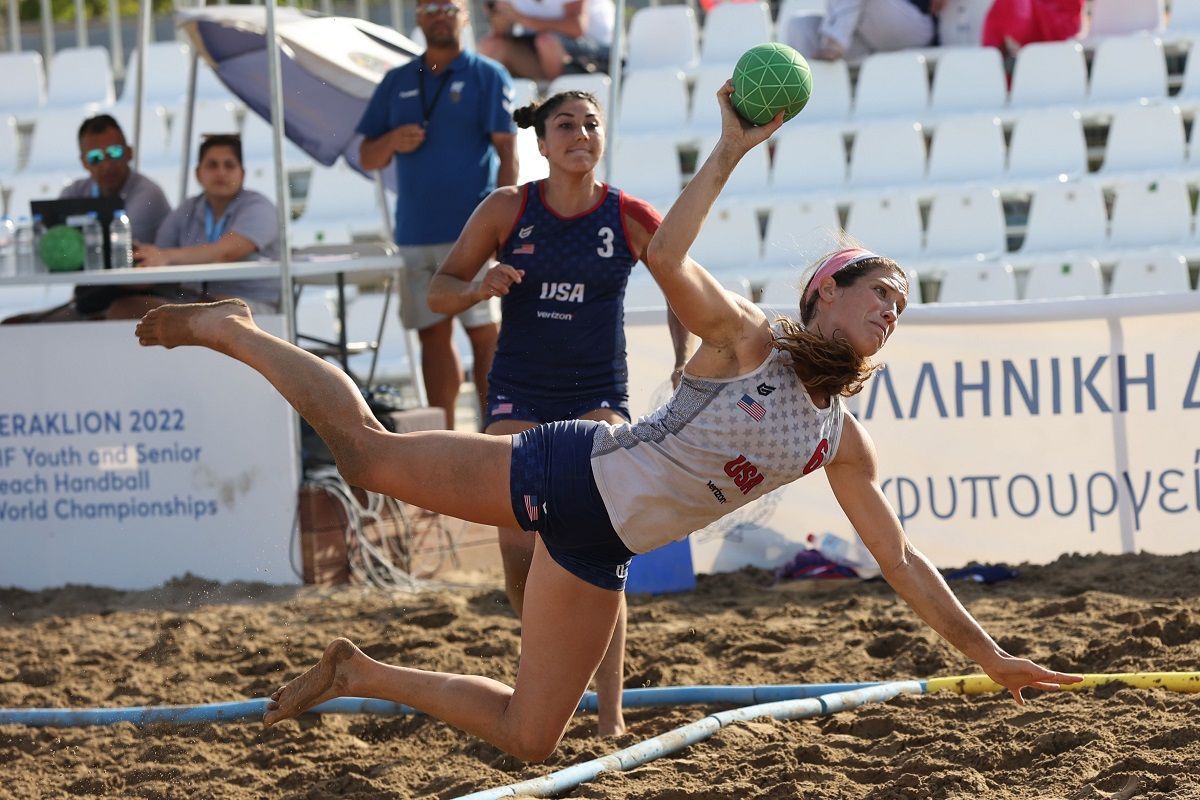 And forget not that the earth delights to feel your barefoot and the winds long to play with your hair.

This could be an excellent description of beach handball - but also of all beach sports. Nevertheless, it is a part of one of Khalil Gibran’s 26 poems; the Lebanese-American author, published in 1923 under the title The Prophet.

And this is the favourite book of Christine Mansour, the pivot of the US women's national team, whose life is intertwined with sports.

After studying behavioral economics at Harvard, where she played basketball, she discovered beach handball and became the most successful American player. Although she is boast 46 international caps, relatively few comparing to Melissa Brown’s 160, the 29-year-old is the team’s top scorer.

Mansour moved to the Netherlands where she played professionally in the hall with the Volendam jersey.

At the same time, she created the first American-Dutch beach handball team that played in 2021 at the European Beach Handball Tour.

Her first contact with Greece was in 2019 at the international tournament held in Paris with the participation of Greece, USA and France. The Americans were impressed with the island, while a documentary was shot about the course of the National team.

Greece and the USA continued to tighten bonds of communication and made joint preparations as well as played friendly matches. The Greek team, as a world champion, transferred their know-how to the Americans.

Are Gibran's lyrics a description of beach handball?

You mention the quote from the Prophet! In this sense beach handball has its foundations on the ground and the breath of air, the passes, the movement are all that the sport have and that is beautiful.

How did you get started in beach handball?

I first saw handball at the Olympics in 2012. Too many elements of indoor handball are common to all the sports I have played, basketball, volleyball… So I tried to play indoor. It was great but it lasted until I discovered beach handball. It has the right balance between power and technique, movement. Indoor handball has more power, it is more aggressive as a game. It's like the NFL in the gym. It has a lot of contact and I was looking for a sport that has more finesse and so I discovered the beach. The rest is history.

You visited Paros for the first time in 2019 and fell in love - like the rest of the team - with Greece.

This is my favourite trip I have ever made. The food, the culture. A great place to play the sport I love.

And you created a documentary about this particular tournament

And now you are making a new one?

We are filming a trailer for the sport, for the team, for the passion and the heart that you need to engage in this sport which is not professional, it is not yet in the Olympic Games, but I believe that it will enter.

You also played professionally in Europe with Volendam.

I played for a year, but I realized I was more passionate about beach handball. I am also a child of California and happened to be in the Netherlands in the coldest winter of the last 20 years…

How is life for an amateur handball player in the United States?

It's hard to play handball in the US. In Europe there are many categories, many leagues, children play from the age of four, while we know the sport much later in life. So, its development is different.

Of course, a lot of good work is done for the development of the sport, from its foundations, from the beginning and it is a way to make your way to the pre-selection of the National and to go to Europe, abroad and play at a higher level.

It is not a very popular sport in the USA. Many people think that this is a game where you hit a ball on the wall with your hand.

It is due to the lack of knowledge and exposure to the sport. It is difficult to find people in the United States who are qualified and capable in the country. Because in the history of our sport there is no handball. We could take the example of football, which is now doing amazingly well.

Beach handball combines many elements from other sports. Big jumps, fast pace. So maybe it's a "hidden" sport that needs a boost. I like to film, to tell a story. And social media is an important part of the spread of the sport and that is what we are trying to do with the documentary. To sow the seed and make the sport known. To tell our story. And the market is small right now and we want to find investors in a virgin market and that is an important way to grow it.

What is your impression of the event so far?

Amazing! I love Greece and its people and it is such a great pleasure to play here. Beach handball has in it the aura of fair play and the energy of cooperation and the Greek culture finds a place in it. They are all so kind and welcomed us with joy.

My parents came to Greece and saw me play for the first time. It is so special. And I'm in a group with a wonderful and special group of women, some of whom are also mothers. We share the passion for the sport and do everything to achieve what they love.