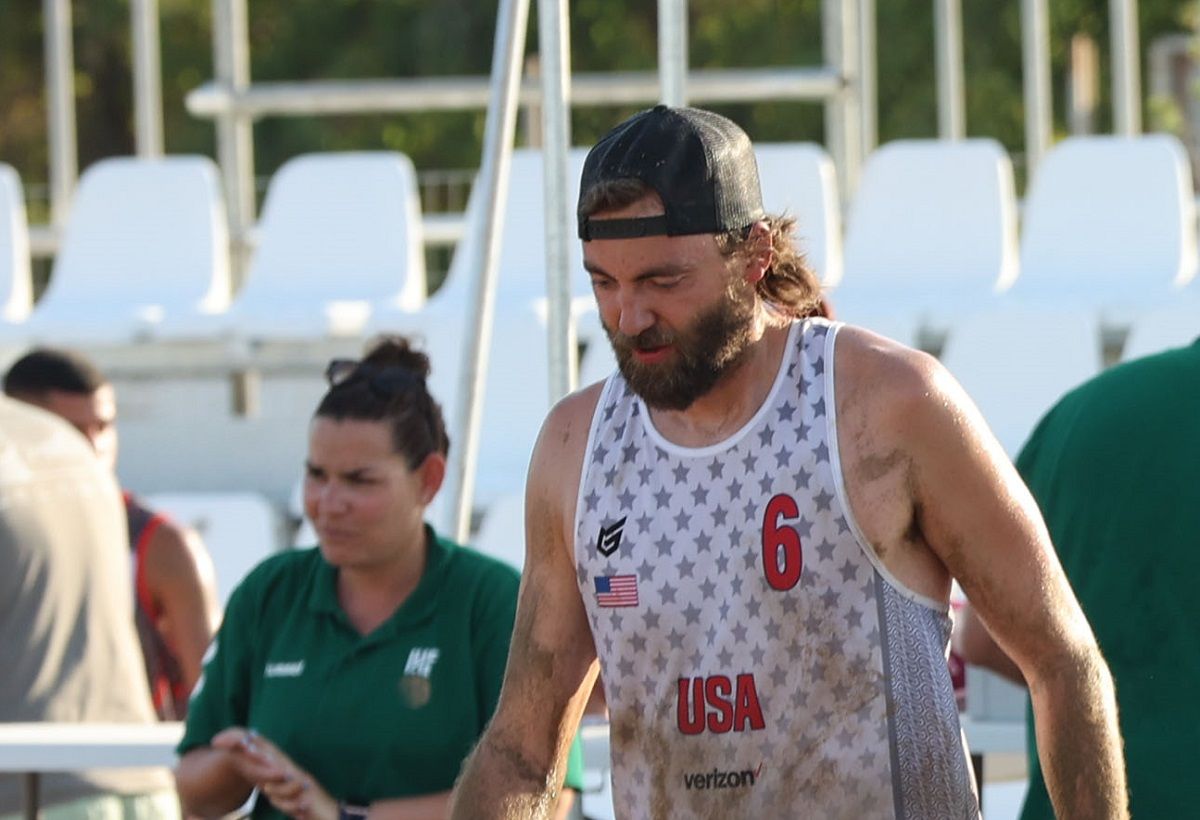 If one is wondering why leave an extremely popular sport and dedicate oneself to another, theoretically lesser-known sport, Willard (Bill) Johnson is perhaps the most appropriate person to help him understand how such a transition is possible and perhaps ideal.

Playing basketball for as long as he can remember, the 35-year-old and 2.01 m tall USA defender is not just a beach handball player. He has played for basketball teams in Costa Rica, Cape Verde, Australia and went to Iceland where he was training with handball players. There came the first acquaintance with the sport, but the transition came with his return to the USA. He learned that one of his compatriots and a teammate in Iceland changed… camp and decided to start training. Then he met with the beach handball which was more suitable for his body.

He did not give up the basketball, since, as one-man band, the MIT graduate decided to split his time between his Seattle home, the beaches of Los Angeles with beach handball and the Tibetan Plateau where he was the coach of Norla, a semi-professional basketball team from nomads. A team that was the subject of the Oscar-winning documentary Ritoma (Ritoma), in 2020.

He is now in Greece with the US Men's National Team for the World Beach Handball Championship and enjoys the Greek hospitality and the games at the Karteros Beach Sports Center.

Fortunately, basketball, handball and beach handball intersect at several points, especially in defense, which is my position. So, many of the basketball techniques using my height, the tactics, I felt that although I did not grow up with handball like the European players, I felt the transition very smooth and natural. It was also a big challenge for me to move to handball after 30 years in basketball.

To make the mind think and the body work differently. Turn the switch to a new sport with new rules and other moves.

Basketball coaching in Tibet allowed me to see the game on another level. Not only regularly but also how I interact with the players but also with myself as a player.

Players are like kids who want to play. The coaches are the adults, the mature ones. Where are you as a player coach?

I do not think I will ever grow up. What I have learned as a coach, mainly from basketball - having played for so long, having been an assistant coach for so long, and then as a first coach - is that there is always something new to learn. The same goes for beach handball. Especially in big tournaments like this. Every possession, in every defense, I see what the opponent is doing and I adapt.

There is this ongoing learning process. There is a hierarchy in this process, but what I am beginning to realize is that the process is cyclical, a relationship is cyclical. Even within a team where the coach has more power. Teamwork can be less hierarchical and more circular, where everyone brings something to the team including the coach.

It started with a family friend. I was interested in this area for many reasons. It is a distant place at least for the USA for which I had heard many interesting things for their culture and then I learned that they love basketball. I learned a lot there. Especially for the way they live. As nomads. They live at an altitude of about 3,000 meters, in the elements of nature. They depend on nature. A true nomad does not live with time, but with the seasons, the sun, the stars and the moon.

I was able to slow down and harmonize with nature. They are Buddhists, so from a spiritual point of view I saw that they see themselves, the karma, the ripples caused by one's actions. And for basketball, how are they transferred. How to pity the opponent, that we are all together in the tournament, but we all evolve and grow through the game.

And it was hard enough to travel from Seattle, to Los Angeles, to Tibet. But I learned so much and I hope to continue learning.

It's interesting. I used to say basketball. But as I make the transition now, there is something about playing on the beach and the sand, there is something in the sport community that I really appreciate. And for the first time I train in Seattle, especially during the pandemic with young players who are interested. There is virtually no beach handball in Seattle. It is mainly in Los Angeles. This is the first time I have taught beach handball and I see much more than it shows.

And I am lucky to be in the team with Ebiyye (s.s. Udo-Udoma) who teaches us so much and is a master of the game, a genius and I try to absorb as much as I can and pass it on to my players. When you start training, it is like teaching and then you start to understand the game better. So it helps me as a player to analyze the game and find the right way to teach it. We will see how it goes in the coming years.

What are his impressions of the event?

Everything runs smoothly. We are in a beautiful country, with so much history. It's a world class event and I'm glad every minute I spend here.