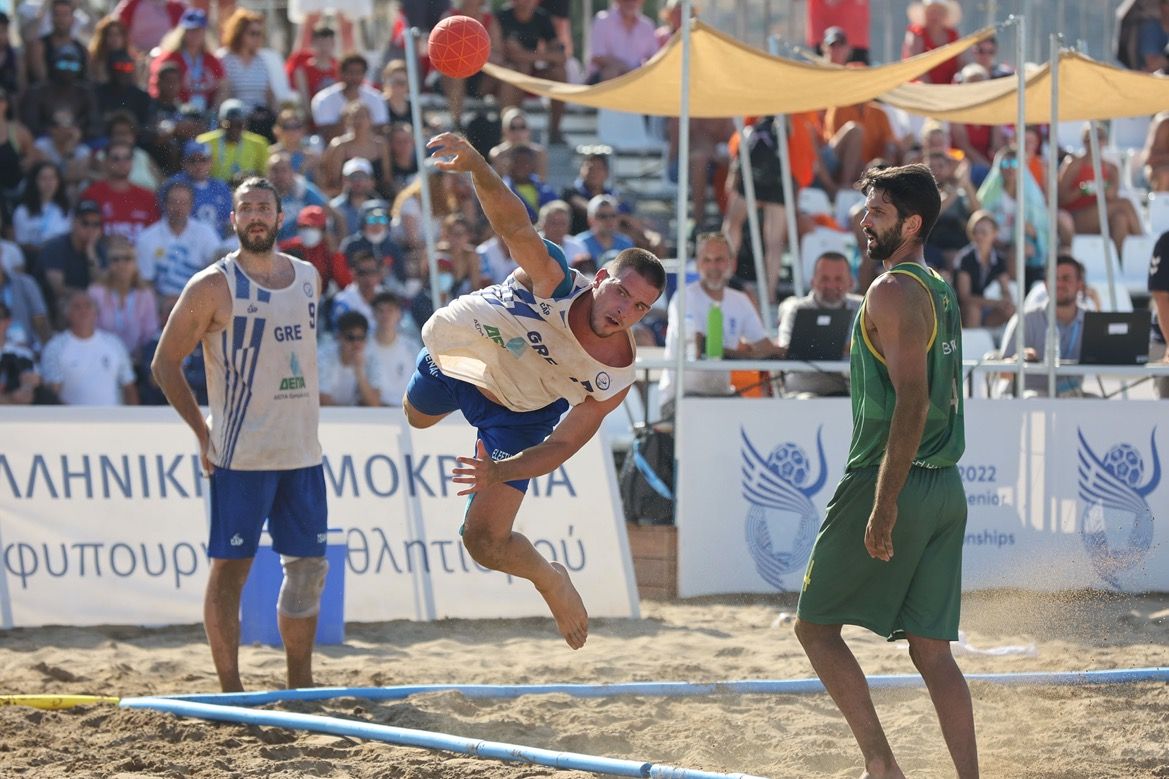 The feat the Greece team was looking for was not materialized in the bronze final of the World Beach Handball Championship.

Brazil may have failed to defend their title in Greece, but they will not leave Crete empty-handed. The victory over the hosting nation with 2-0 (18:15, 24:18) gave the great Gil Pires the redemption he was looking for what might be his last big tournament, after the missing shot he had in the semi-final against Denmark.

At the same time, the great Brazilian player upset his good friend Giannis Lazaridis, being along with Amaral the most influential figures in attack, while Seben made seven saves in defence.

Greece fought hard in the first set and came within point (16:15) of catching Brazil, helped by Boskos shots but the Brazilians made their last shot to take the lead.

In the second set, Gourgoumis made eight saves, but his heroics were not enough for the Greeks to make it even.

"Well done to all my teammates. We gathered 45 days ago and we managed to rank among the world’s best teams.

“We lost to the defending world Champions, having previously beaten teams like Qatar, Spain, Argentina and USA.

“We wanted to win a medal here in Crete, in our own country, but unfortunately we didn’t make it.

"I believe our overall performance was very good, we can do more in the future".

"A fourth place in the world is a very big thing, but it leaves us with a bitter taste because we did not manage to get a medal. We were very close and the fact that we feel like this after losing to teams like Croatia and Brazil proves that we are a good team.

“My players were hungry for success, it was obvious for the very first moment. You could see it in the warm-up and until the last second of every game. Hats off to them.

“We lost to a team that was only beaten twice in the past seven years, due to a couple of errors in a couple of possessions. We did not have a clear mind, maybe it was due to our inexperience and the pressure you feel in such big games.

"Our overall performance shows that this team can have a bright future".

"We are happy with the effort we put and with the bronze medal, because we played and defeated a very good team like Greece.

“When we came to the tournament our goal was to win the gold medal, but as I said to my teammates, we should be satisfied with bronze because we tried hard and we missed it in details.

“The whole event was successful and we really liked that we came here in Greece and Crete. It is a place that resembles our country Brazil, as well as the people, who are warm and helped all teams”.

"It was a difficult tournament for us, there were lots of good teams. Especially in our last game with Greece we had to play much better than at the others, because they wanted to win it badly and get a medal in front of their fans and also because they are a very good team.

“Our goal in the beginning was to get the gold, but we had some problems and that is why I believe that the bronze medal is a success.